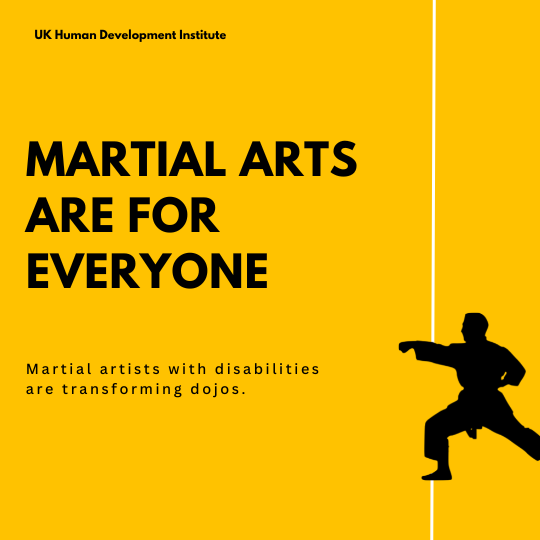 The first thing you do when you enter the dojo is take off your shoes. You’ll see a rainbow of colored belts around the waists of students in matching cotton garb, called gi in karate classes. The puzzle piece edges of thick foam mats fit together to form a training area. You might see a symbolic shrine on the front wall, the shomen.

Typically thought of as a martial arts training facility, the origin of “dojo” transcends contemporary notions. The Japanese word translates literally as “the place of the way.” The dojo is a place of ritual and discipline, designed for collaborative exploration free from distraction. The dojo is a place for the practitioner to learn about the world and the self.

Darrell Mattingly, computer specialist at HDI, developed HDI’s Adaptive Martial Arts training course, which teaches martial arts instructors about disability etiquette, universal design and how to adapt their teaching to be inclusive of students with disabilities. Mattingly serves as president of the Adaptive Martial Arts Association, which offers further resources for both students and instructors.

According to Mattingly, there is no standard way of “adapting” martial arts for individuals with disabilities. The nature of adapting makes the experience highly individualized. Mattingly, who has cerebral palsy, took a strong interest in martial arts as a child, but he did not have access to formal training, stating “at that time, training someone with a disability was unheard of.” At 31-years-old, he began training in kenpo karate.

When Mattingly’s second instructor, Master Steve Finn, took over, Finn took the approach of finding what worked, rather than teaching by the book. It was then that Mattingly began to see real progress. Now, Mattingly holds the rank of Sandan–that is, a third-degree black belt.

The adaptive martial arts training, which takes about an hour to complete, is free and open to the public. The course consists of three sections made up of video, supplemental text and brief review quizzes. Much of the course is applicable to instructors and researchers with interests in adaptive sports even outside the realm of martial arts.

The first section gives an overview of disability etiquette—how to be respectful and grant autonomy to the individual receiving instruction. It includes helpful lists in plain language about what to do and what not to do, while acknowledging individuals all have their own preferences regarding etiquette.

The second section focuses on universal design—what does the built space of an inclusive dojo look like? What does accessible instruction look like? Can an instructor legally deny instruction to an individual based on their disability? (Spoiler: no., they can’t.)

The course’s last section explains the benefits of adaptive martial arts for individuals with disabilities and how to adapt instruction. Benefits described include social, cognitive, emotional and physical benefits. The course reviews assistive technology and considerations the instructor should make based on the individual and the facility.

The idea for the course started with Adaptive Martial Arts Association founder Jason Davis. Davis was the impetus that drove the collaboration that leading to the completion of the module.

Accessibility is not a luxury feature, but rather, it must be an essential and non-negotiable function of the built world. In the case of the dojo, access is integral by its own translation: the place of the way.

“It is a place of freedom of expression with respect for others. It is for this reason, among other things, that a dojo, wherever it is located, is a place of non-discrimination, open to anyone who wishes to discover the way,” writes Nicholas Messner of the International Judo Federation.

HDI’s Inclusive Public Health Collaborative is a partner of the Adaptive Martial Arts Association. Other HDI staff members involved include Lindsey Mullis, Trenton Marcum, Morgan Turner, Jon Drummond, Austin Nugent and Kari Jones, as well as UK students Collin Burkle and Ellie Fahey, each of whom extensively contributed to the development of the course and continue to support ongoing work.

The training module was funded by a CDC (Centers for Disease Control) grant. While no funding has yet been secured for further development of the course, the team is hopeful that the adaptive martial arts training will be expanded in the future. One possible expansion is a component with focus on mental health, something instructors who have completed the course have suggested in their feedback.

You can take the adaptive martial arts course by creating an account on the HDI Learning page and then following this link to the course module.

For questions about the course or the Adaptive Martial Art Association, please email Darrell Mattingly at darrell.mattingly@uky.edu. 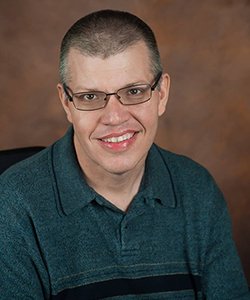 On May 21, 2021, an Executive Order was issued by Governor Andy Beshear that extends Darrell Mattingly’s appointment to the KY Statewide Independent Living Council until 2024. Mattingly, a Computer Specialist at HDI also serves on the Hart-Supported Living Council.

The Statewide Independent Living Council, known simply as SILC, is a federally mandated, governor-appointed council. The majority of members are individuals with disabilities. The SILC is required to develop, monitor and review a state plan, in conjunction with the state Department for Aging and Independent Living (DAIL), that addresses the independent needs in our state; develop and support a statewide network of Independent Living Centers; submit periodic reports to DAIL, coordinate activities with the state Rehabilitation Council; and ensure all regularly scheduled meetings of the SILC are open to the public and provide reasonable accommodations when requested with a one-week notice. 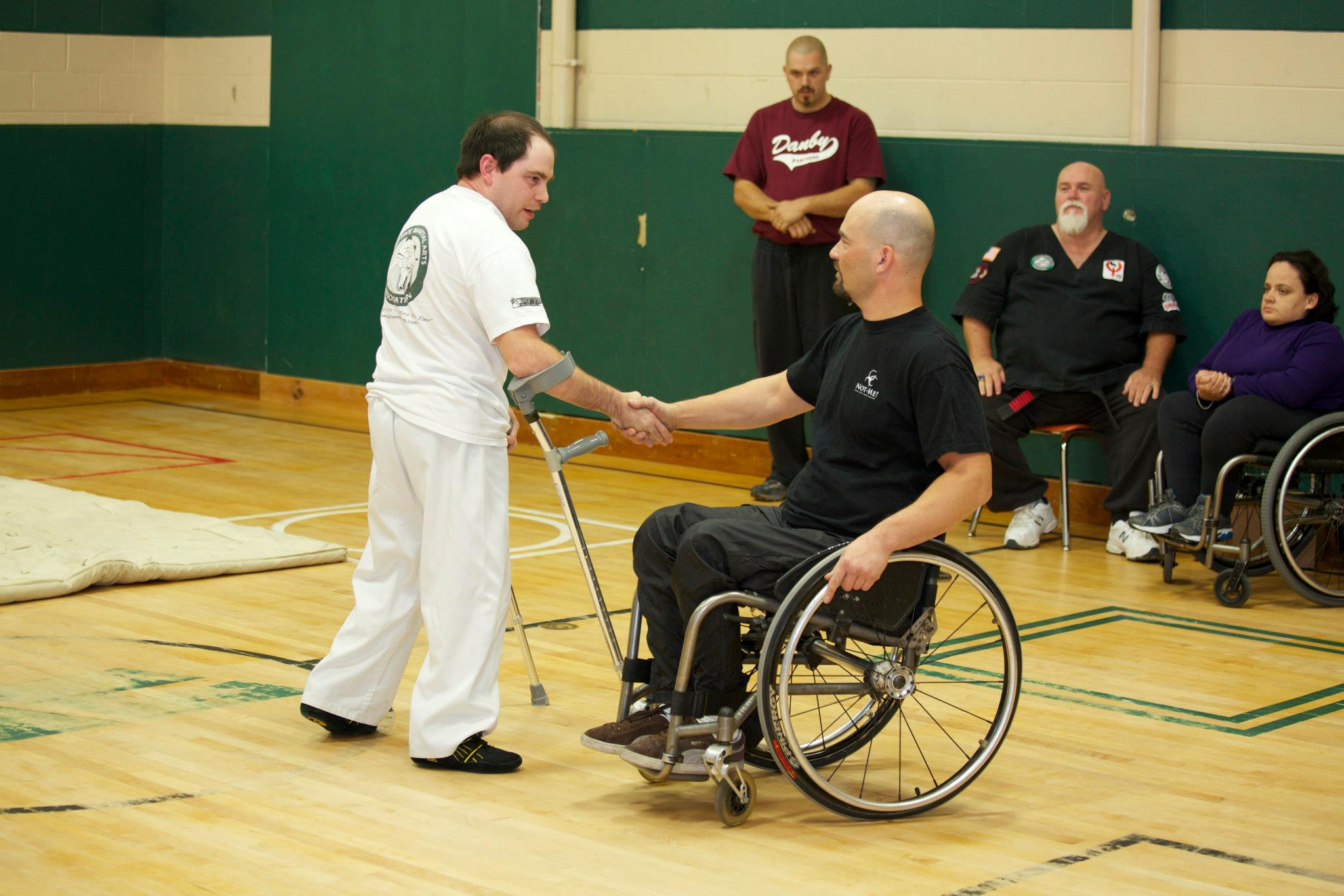 The Kentucky Inclusive Health Collaborative at the UK Human Development Institute is excited to partner with the Adaptive Martial Arts Association (AMAA) to develop training modules for a web-based certificate course for instructors to increase capacity for adaptive martial arts in their academies. These modules will raise awareness about disabilities, promote the use of universal design, and share successful implementation strategies to support martial artists of all abilities. The creation of this course will help fulfill the AMAA’s mission of expanding opportunities and inclusion for people with disabilities through education, support, and promotion of health and physical fitness in martial arts.

Darrell Mattingly, Computer Specialist at UK Human Development Institute has been appointed by Governor Andy Beshear to serve a two-year term on the Hart-Supported Living Council. The Council is composed of 11 members and has statutory authority to make recommendations to the Cabinet for Health and Family Services regarding the delivery and quality of supported living services for people with disabilities.

The Hart-Supported Living Program began in 1992 and was amended in 2006. This law promotes opportunities to determine the kind and amount of natural supports desired by people with disabilities to live in a home of their choice and have access to participate in their local community. HDI has long been involved with Hart Supported Living, with staff having coordinating and Council membership roles. “Hart Supported Living promotes people with disabilities having control over their lives, and in determining what supports are needed to live in the community,” said Kathy Sheppard-Jones, Executive Director of HDI. “People with disabilities need to have the authority and responsibility to navigate their lives, as all people do. Darrell’s insights and genuinely caring approach makes him an asset to the Council and HDI” 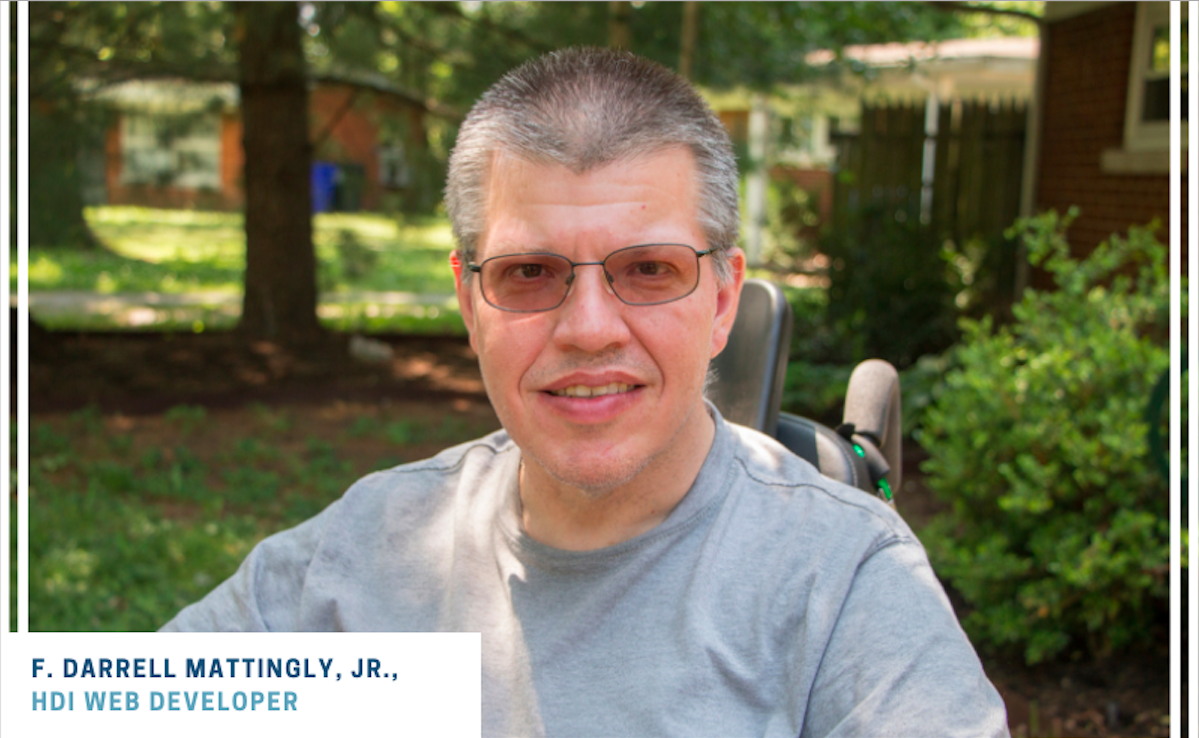 HDI means “family.” We have common goals and values moving toward an ever changing but bright conclusion that we will never reach. Work goals, research, best practices flow like the tide; they come and go, but our values remain. As long as we stay true to our values and principles, HDI will remain a guiding star for the Commonwealth for many more years.
—F. Darrell Mattingly, Jr., HDI Web Developer