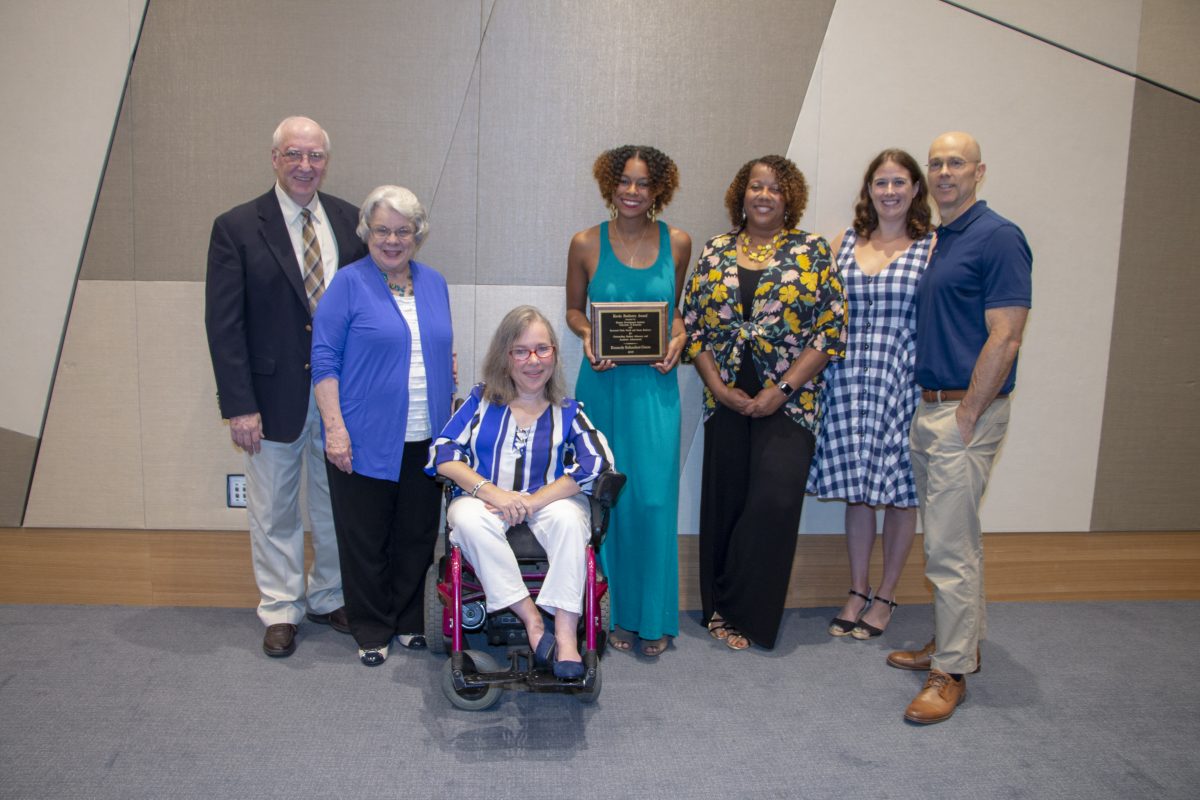 The University of Kentucky Human Development Institute (HDI) has presented the 2019 Paul Kevin Burberry Award to Kennedy Guess. Guess is the first UK student to complete the Certificate in Universal Design and founder of UK Still We Rise award. Kennedy will be pursuing her graduate studies in Houston as a speech pathologist.

I’ll never forget the day my life changed and I didn’t even know it. I was short one class for the semester. My advisor told me to take Universal Design, a class offered by the Human Development Institute. I thought this would be my easy A class, that I barely went to. But little did I know that this one class would help me forge a lifelong connection with Dr. Elaine Eisenbaum. And I promise I never missed her class that entire semester, but she also had a crazy attendance policy so I didn’t have a choice. I was fascinated by the things I learned. I was excited to learn about and advocate for persons with disabilities. I wanted to make an impact.

I immediately enrolled in the Universal Design certificate to continue my education.

Through a travel scholarship from HDI I attended the Disability Policy Seminar and was able to learn about policies and laws regarding people with disabilities. We went on hill visits and spoke with lawmakers such as Senator Mitch McConnell and other Kentucky politicians. I sharpened my advocacy skills and was empowered to promote change at the University of Kentucky.

Through the Universal Design Certificate with the help of Dr. Eisenbaum I founded the Still We Rise program, did a practicum at HDI Center for Assistive Technology, helped plan the first AT summit, and many more things. I was able to make an impact. Thank you to everyone at the Human Development Institute for constantly making an impact and allowing your students the opportunity do the same. —Kennedy Guess

The annual Paul Kevin Burberry Award honor is given to a student who has demonstrated a strong commitment to people with disabilities, academic excellence, and the leadership qualities exemplified by Burberry’s own life. It is named in memory of the Berea native who was the first student with significant physical disabilities to graduate from Berea Community High School. He went on to Berea College and UK, as a philosophy major. While a student at UK, Burberry worked with HDI to create training modules to train medical and allied health students on developmental disabilities. Though his life was cut short before graduation, he was posthumously awarded his UK degree with highest honors in 2004.

I was born to be a speech pathologist. In my preschool class they sat me next to a little boy who everyone assumed could not speak. Even as a child I was never able to take no as an answer. I talked to him anyway, just like I would anyone else. It wasn’t long before I was speaking to the teacher on his behalf. He would whisper responses in my ear and I would say them out loud for them. But even at four years old I knew communication was a right and so did Kevin. Kevin Burberry was a light in this world. He never let anything that limited him, hinder him. He utilized very sophisticated augmentative communication devices to get his words across. As a future speech pathologist, it is an honor to receive an award that carries the name of such an outstanding, resilient person who had such an impact on this world. I plan to carry on this legacy and continue to make my own impact just like Kevin did.

Although I was never afforded the opportunity to meet Paul Kevin Burberry, I know his name. I said I never wanted to leave somewhere without anyone knowing I was there. That’s exactly what Kevin did. He created an impact, a legacy, he changed the world. I am so grateful to receive this award named in his honor. Communication is a right, and as a born speech pathologist I will continue to fight for people like Kevin. —Kennedy Guess