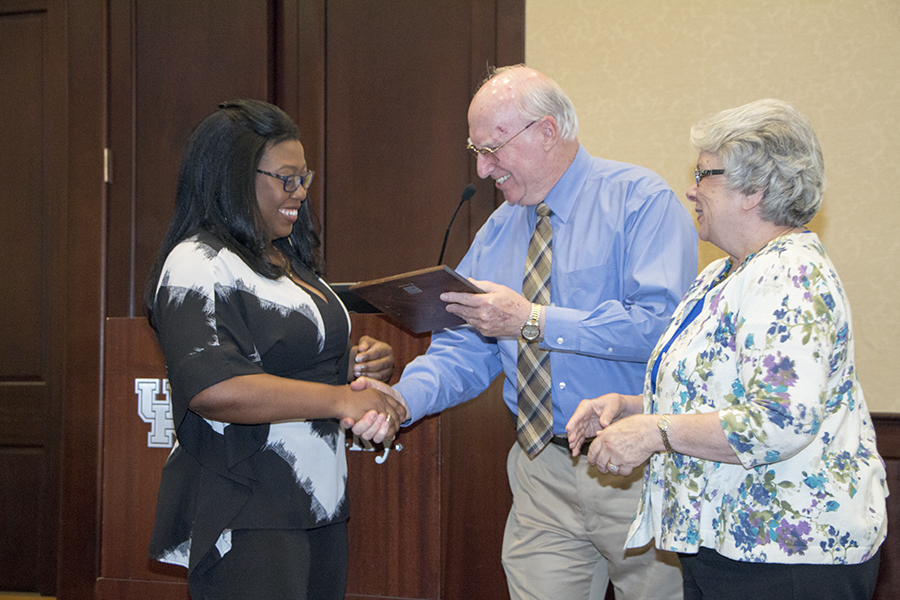 On June 16, Lisa Dunkley was named by the University of Kentucky’s Human Development Institute (HDI) as the winner of the prestigious 2017 Paul Kevin Burberry Award.

Lisa recently completed the Graduate Certificate in Developmental Disabilities program at the Human Development Institute (HDI) and is a doctoral student in Rehabilitation Counseling at the University of Kentucky. She currently has a Research Assistantship at HDI and has demonstrated a strong commitment to people with disabilities through an innovative HDI leadership project called Project Teach One Reach All (TORA), with the aim to promote disability awareness and inclusion of students living in residence halls on the UK campus.

Lisa also took advantage of the opportunity to serve as HDI’s Trainee Liaison sharing Association of University Centers on Disabilities (AUCD) network information with HDI students. In addition, Lisa was awarded the highly competitive 2016 AUCD Conference Trainee scholarship enabling her to present a collaborative poster, “Living Learning Communities: Socialization or Isolation for Students with Disabilities,” based on her HDI leadership project at the AUCD conference in 2016. In Spring 2017, Lisa and our Preservice Training Coordinator, Walt Bower, further collaborated on marketing an HDI symposium titled, “Serving Those Who Served Us: Understanding Military Culture and Disability Awareness in College.”

The Paul Kevin Burberry Award is named in memory of the Berea native who pioneered a trail in the public school system as the first student with significant physical disabilities, due to cerebral palsy, to complete Berea Community High School. Kevin Burberry graduated with highest honors and went on to attend Berea College and the University of Kentucky, where he majored in Philosophy. He was an exemplary student and self-advocate, and worked on an HDI project that created training modules in developmental disabilities for medical school students and other allied health student professionals that are still used today. Kevin’s  life was cut short prior to his anticipated graduation, and he was awarded his UK degree posthumously, with highest honors, in May 2004.

The Paul Kevin Burberry Award — the highest student honor awarded annually by HDI — is given to a student involved with HDI who has exemplified in his or her life the leadership, advocacy and commitment to persons with disabilities and their families that Burberry demonstrated in his own life.

Lisa, in sum, is a superbly able, creative, and talented individual. Lisa is deeply committed to her disciplinary field and has an abiding interest for continued learning within the field of developmental disabilities. —Walt Bower