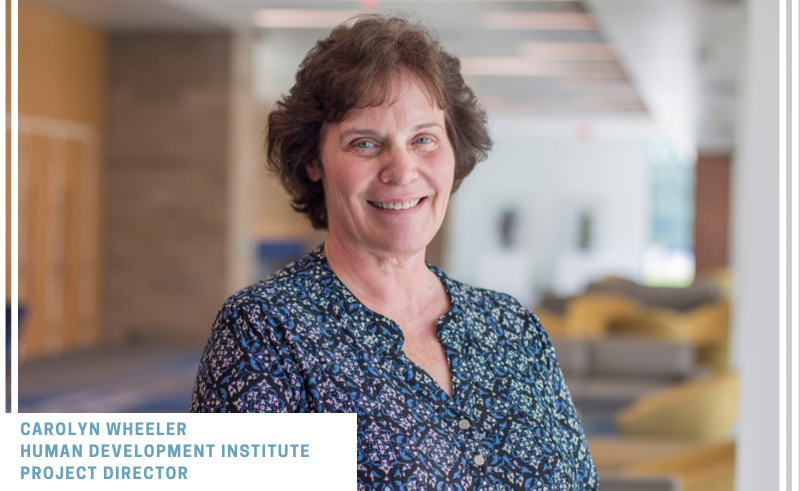 HDI will continue to play a key role in systems change efforts here in Kentucky as well as impact people with disabilities and their families on a personal level.
-Carolyn Wheeler, Human Development Institute Project Director

How did you come to know HDI?
While I do not recall the occasion, I met Harold Kleinert and Jacqui Farmer Kearns in the late 80’s when I worked for what was then Seven Counties Services (now Centerstone). We worked together with Mike Burdge to form KY TASH, as well as several other collaborative adventures. Harold told me about a Project Coordinator position for a Personal Futures Planning Project for young adults who were deaf-blind to assist with their transition from high school. I was fortunately hired for the position and came to work for HDI in November of 1990. I had also met Karen Middendorf through various connections with staff and two amazing parents who were also staff at the former KY DMR  – Doug Riddell and Jane Hart. These two people greatly influenced my life both professionally and personally.
How long have you been at HDI and what is your role?
I have been fortunate to have been involved with HDI since November of 1990 either in a staff or contract role. As is often the path for many HDI staff, one project leads to another until it doesn’t! When I was not on staff, I was on contract with one or more projects for a training or meeting facilitation role.
During your time at HDI, of which accomplishments are you most proud?
I am most proud of the passage of legislation in 1992 which created the Supported Living Program which was later named the Hart Supported Living Program after Jane Hart. As part of the Personal Futures Planning Project, I convened a stakeholder’s group to explore the development of a self-directed model (before we even had those words) of support. I helped write the legislation, organized testimony before several key Committees of the KY General Assembly, and was present when the legislation was passed. I am also proud of the work that Milt Tyree and I subsequently did the following three years with funding from DD Council to establish the internal structure for the program.
Looking back, can you please share with us a fun or fond moment you had at HDI?
Being present with Kathy Sheppard-Jones, Katie Wolf Whaley, Jeff White, and Becky Cabe when Governor Matt Bevin signed the Employment First Order in May of 2018 was a really fun and exhilarating moment!
Do you have any advice you would like to share with current and future staff and students at HDI?
Stay connected – the relationships you establish can extend beyond your time either as student or staff with HDI.
What does HDI mean to you?
Community – I am very fortunate have a community of friends and colleagues with whom I share not only a common professional vision and mission but also the opportunity to value and support each other through life’s challenges and opportunities.