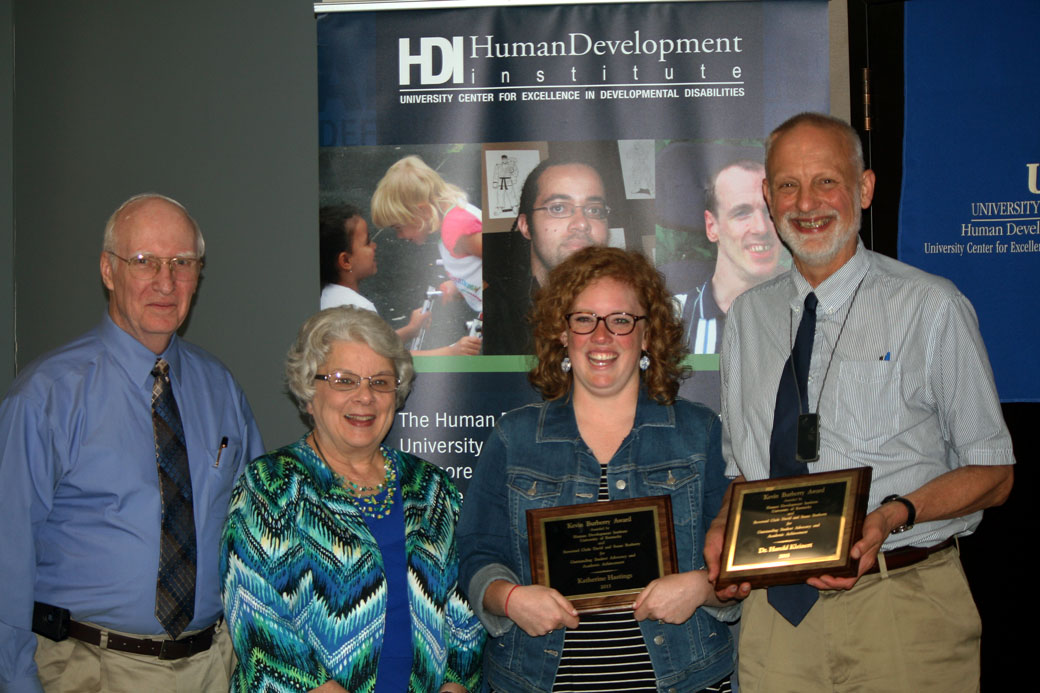 On June 19, both Dr. Harold Kleinert and Katie Hastings were named by the University of Kentucky Human Development Institute (HDI) as the winners of the prestigious 2015 Paul Kevin Burberry Award.

Dr. Kleinert has served people with intellectual disabilities for nearly 47 years, the last 27 of those as part of HDI and is retiring on June 30, 2015 from his position as the Executive Director of HDI. He also serves on the board of the Association of University Centers on Disabilities and the Commonwealth Council on Developmental Disabilities. He has improved the world for people with developmental disabilities both nationally and in Kentucky by building meaningful training programs for educators and medical providers, and he has offered thoughtful, supportive, and kind mentorships to countless students over the years.

Hastings is a former HDI Graduate Certificate student and is currently a Research Assistant for the KY Peer Support/Network Project, where she has contributed tremendous energy and passion toward helping students with intellectual disabilities develop friendships and join their communities. She is a doctoral student in the UK School Psychology program, and she serves on the board of the Down Syndrome Association of Central Kentucky and works directly with a young lady with Down syndrome to access supports.

The award is named in memory of the Berea native who pioneered a trail in the public school system as the first student with significant physical disabilities, due to cerebral palsy, to complete Berea Community High School. Kevin Burberry graduated with highest honors and went on to attend Berea College and the University of Kentucky, where he majored in Philosophy. He was an exemplary student and self-advocate, and worked on an HDI project that created training modules in developmental disabilities for medical school students and other allied health student professionals that are still used today.  Kevin’s  life was cut short prior to his anticipated graduation, and he was awarded his UK degree posthumously, with highest honors, in May 2004.

The award — the highest student honor awarded annually by HDI — is given to a student involved with HDI who has exemplified in his or her life the leadership, advocacy and commitment to persons with disabilities and their families that Burberry demonstrated in his own life.

According to HDI Training Director, Kathy Shepherd-Jones, “The Burberry Committee and all of HDI strongly endorsed honoring Harold as a recipient of this year’s  award, not only because he had collaborated with Kevin over the years, but because of his role in helping to impact so many students’ lives and careers. It was particularly meaningful that he share the award with Katie Hastings, whom he works closely with on the Kentucky Peer Support Network Project.”

Project Coordinator, Patti Parsons, says that Hastings demonstrates a level of community involvement that is “highly unusual” for a student still in school. She goes on to explain that Hastings has been very proactive and demonstrated tremendous individual leadership in recruiting students to participate in the KY Peer Support/Network Project and developing a Student Leadership module to train students with disabilities to take on leadership roles at school. According to Parsons, “Hastings has consistently demonstrated leadership which was a a critical attribute of Kevin’s life, and Katie clearly has demonstrated that attribute in her graduate career.”