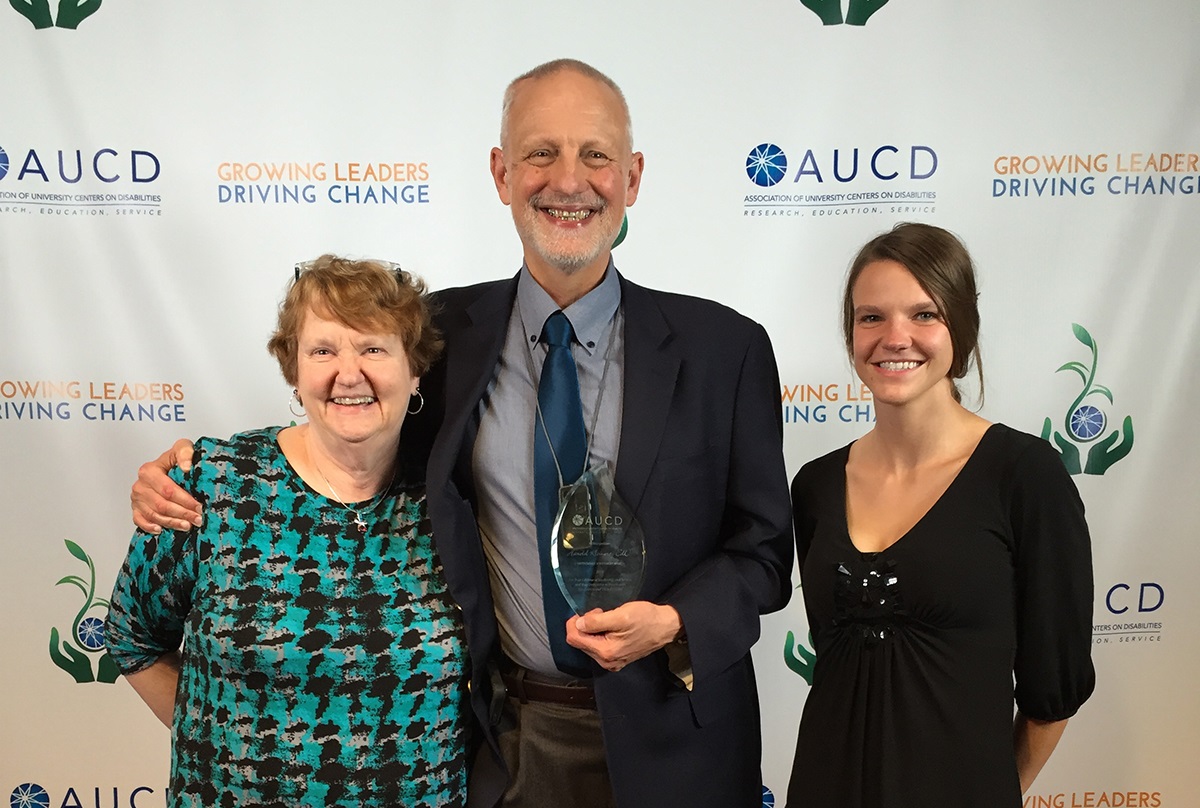 Retired HDI Executive Director and Professor Emeritus, Dr. Harold Kleinert, was recognized on Tuesday, November 17, with the top honor from the Association of University Centers on Disabilities, the George Jesien Lifetime Achievement Award. The award is named for Dr. George Jesien who served as the Executive Director of AUCD for 14 years and led the organization’s growth to a national force in the disability community. Joining Dr. Kleinert for the ceremony were his wife and daughter, Jane and Coady, Dr. Kathy Sheppard-Jones, and a number of HDI staff and students. Dr. Jesien offered a glowing introduction of Dr. Kleinert, describing his infectious laugh and good nature as he has inspired and mentored other professionals during a critical transitional time for people with disabilities in the US. During his acceptance speech, Dr. Kleinert described the tremendous progress in the disability movement since his early days as a special education educator working in an institution; the tremendous developments through the Americans with Disabilities Act, the Individuals with Disabilities Education Act, and movements toward educational and societal inclusion; and the important role of advocates in ushering in those changes. Dr. Kleinert also emphasized that the work is not done, particularly in the most vulnerable moments during a prenatal or postnatal diagnosis and at the end of life.

We can think of no one who better exemplifies the characteristics of a George Jesien recipient than Harold Kleinert. So many of his colleagues have expressed that he “walks the talk.” His strong spoken and written advocacy has been consistent with his lived advocacy. Harold has inspired, motivated, and empowered HDI staff to make our vision happen as well as colleagues around the state and nation. He does that by focusing on people first, not projects. He sees the strength in all of us and our ability to contribute, connect, and make a difference in a vision much bigger than us. In that way, he has inspired the next generations of leaders who will continue to carry on his work and be the agents of change he knows that they can be. –Dr. Kathy Sheppard-Jones